can provide a food pack with essentials for a family
can provide essential support services to vulnerable women suffering from domestic violence
Can provide a family with food, clothing, and hygiene kit
Enter Amount

Islamic Relief aims to be the first responders when a disaster strikes, assessing the situation, providing emergency relief, and helping those affected immediately. When floods, droughts or earthquakes happen, we provide life-saving food, water, shelter, blankets, and basic essentials to families who have lost everything. We not only save lives, we rebuild them through continuing our work even after the disaster has calmed, helping families rebuild their lives. Islamic Relief classifies “disasters” as a serious disruption of the functioning of a society, involving widespread human material, economic or environmental losses or impacts, which exceed the capacity of the affected community to cope. We work closely with Government when any incidents occur assisting with rapid assessments in order the assist those affected by the crisis.

Eldorado Park, Kliptown, were severely affected by floods on February 26, 2022, due to the severe rains in the Johannesburg area. The flooding impacted 48 households in total, and all of their furniture, food, and clothing were ruined. 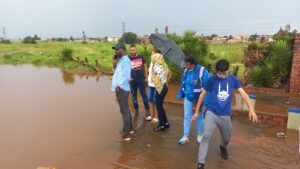 A needs assessment were rapidly done and affected families were provided with essentials to ease the suffering of losing all their belongings such as blankets, mattresses, hygiene kits and food packs. 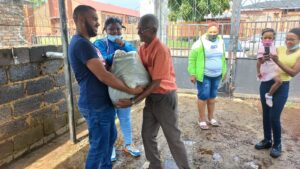 In April 2022, KwaZulu Natal Province experienced a consistency of severe rains, which led to massive flooding destroying homes, roads, bridges, schools and human life. Nearly 4000 homes were reported to have been destroyed, with 8300 homes partially damaged. The estimation of more than 40 000 people were internally displaced by the floods while over 400 people were killed while many remain more remain missing and assumed dead.

The majority of people affected were the residents of informal settlements, which are usually built along streams and rivers. Most of the shacks were washed away leaving a trail of destruction and devastation of livelihoods. Thousands of affected people were accommodated in temporal shelters in tents and community halls.

As part of our Emergency Response Plan, Islamic Relief KZN had procured the above items in readiness for any disaster. However, at the time of the KZN floods, only emergency food packs had been secured and stored. Islamic Relief KZN collaborated with Polokwane Muslim Welfare Foundation to distribute 1000 emergency food packs to affected areas through the network of Imams supported by the Imam Development program.