“Whoever saves the life of one, it is as if he saved the whole of mankind”

When an emergency strikes, Islamic Relief aims to be the first on the ground, swiftly assessing the situation and providing immediate relief and ongoing support to those affected.

Our presence in over 40 countries is saving the lives of millions of people all across the globe. From war-torn regions like Syria, Afghanistan, Yemen and Gaza, to drought-stricken countries in East Africa, and flash-flooded countries like Pakistan, Bangladesh, and Sudan, we are on the ground,  providing families with life-saving food, water, shelter, medical care and psychosocial support, and helping to rebuild communities.

In Indonesia, a shallow earthquake measuring 5.6 on the Richter scale at a depth of 10km struck the main island of Java, affecting the Cianjur, Bogor, Bandung, Sukabumi, Bogor and Jakarta districts. The earthquake has been followed by around 140 shocks. Current estimates place the death toll at over 268 people, including many children, with more than 1,000 people wounded, and 58,000 people evacuated from their homes.

Islamic Relief in Indonesia immediately deployed its emergency response team and partnered with the country’s Disaster Management Agency to distribute tarpaulin, hygiene kits and other essential items. Following a needs assessment, we are scaling up our emergency relief and support in the country. Islamic Relief will invest more than R10 million over the next two months, as part of our early recovery interventions, which will include the provision of temporary shelter, schools, water and sanitation, and the restoration of livelihoods. 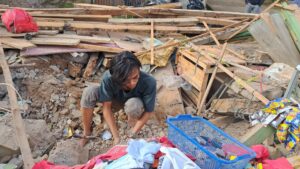 Pakistan was hit with flash flooding which began in late August 2022, impacting the lives of 33 million people – including 16 million children – translating to roughly 1 in 7 people in the country. Hundreds of thousands of homes, roads, bridges, schools, and hospitals have been damaged or destroyed; 4.4 million acres of crops have been ruined; and over 1,600 lives have been lost.

By October 2022, Islamic Relief had provided temporary shelter, food and clean water, sanitation, cash grants, and much more, to well over half a million people. We are now preparing to help rebuild the country by repairing infrastructure, revitalising agriculture, and ensuring the provision of psychosocial support, among many other initiatives. 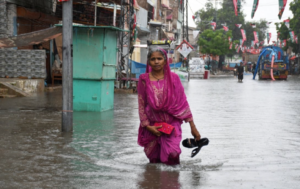 In Gaza, tension between Palestinians and Israelis has escalated into the worst violence in the Occupied Palestinian Territory since 2014. The latest escalation in conflict has so far killed over 200 Palestinians, including scores of women and children. Airstrikes have forced terrified and traumatised families to flee their homes. However, Israeli blockades prevent them from leaving the enclave, so these displaced people are living with relatives, or in schools, unable to reach places of safety. The airstrikes have broken many international laws and confirmed Gaza as the largest open-air prison in the world.

Islamic Relief has a team of 60 staff on the ground in Gaza. Our colleagues live and work in the communities we serve, and they too have been affected by the violence. Some have had bombs destroy their homes and injure their loved ones. We are assisting the injured and are focused on helping to rebuild Gaza by repairing schools, medical centres, homes and other vital infrastructure.

In Bangladesh, heavy monsoon rains have led to rivers bursting their banks, cutting off millions of people. Many families are stranded and have either run out of food or are at risk of running out of food very soon. Communities in low-lying areas of Sylhet and Sunamganj have been deluged. Homes and schools, as well as vital infrastructure such as power supply lines, water sources and roads are all damaged or underwater.

Islamic Relief has been working in the flood-prone country for over 30 years and is responding to this latest disaster by distributing life-saving aid. In addition to hiring boats to reach stranded people, we are distributing food, water purification and hygiene items, and cash grants for affected farmers to buy seeds, tools and fodder. Islamic Relief will also be working closely with the ward disaster management committees set up through our extensive disaster-preparedness programming in Bangladesh.

In Afghanistan, conflict intensified in 2021, with the withdrawal of international forces and major shifts in power – all of which have led to a dire economic and humanitarian crisis. Already suffering the worst drought in decades, the country has also recently been struck by a devastating earthquake which took many lives. Survivors face hugely challenging conditions without adequate food, water, or shelter. More than half of the population – 24 million people – need urgent humanitarian aid. Islamic Relief has been working in the region since 1999, delivering vital humanitarian aid, including food, water, medical aid and shelter, as well as life-changing development assistance.

In East Africa, nearly 20 million people in parts of Somalia, Ethiopia and Kenya are in the midst of an ongoing drought – the extent of which has not been seen in at least 40 years. Millions of people are waking each day to food insecurity, while over a million livestock have died due to the severity of this climate crisis. People are fleeing their homes and villages in search of food, water and safety. With the situation worsening each day, the need for assistance is urgently rising. Islamic Relief is working on the ground in these drought-stricken countries, assessing the unfolding situation and providing much-needed relief, such as food, water, healthcare and shelter to more than 150,000 families. Millions more are in dire need of our help and we will continue to provide as much assistance as we are able to.

In Sudan, flash floods caused by heavy rains have affected an estimated 136,000 people – a number expected to rise to over 400,000 by the end of the rainy season. Vital infrastructure, including homes, healthcare facilities, and water and sanitation infrastructure have been damaged or washed away. Islamic Relief is monitoring the ongoing crisis and providing medical support, food, water and shelter to affected people.

Our Global Emergencies Fund ensures that we can respond to disasters as swiftly as possible, assist with recovery and help to rebuild the lives of those affected.

At Islamic Relief, we not only aim to save lives, but are committed to helping communities restore their livelihoods and dignity. We also work to educate and empower communities, so that they can be better prepared when disasters strike.