16-year-old Mohamed Merey is travelling to Amman, Jordan in December to compete in a regional tennis tournament – but his journey hasn’t been that of a typical young sports star.

Mohamed has both learning and hearing disabilities, and has been attending Islamic Relief’s Early Intervention and Rehabilitation Centre (EIRC) in Egypt for 11 years – ever since it opened in 2002.

As well as speech therapy, Mohamed also joined the centre’s sports activities, which is where his athletic talent was first discovered. Since then, he has been nominated to participate in the World Badminton Championships in Greece, as well as scooping silver at the National Floor Tennis championships last month in Cairo, Egypt. 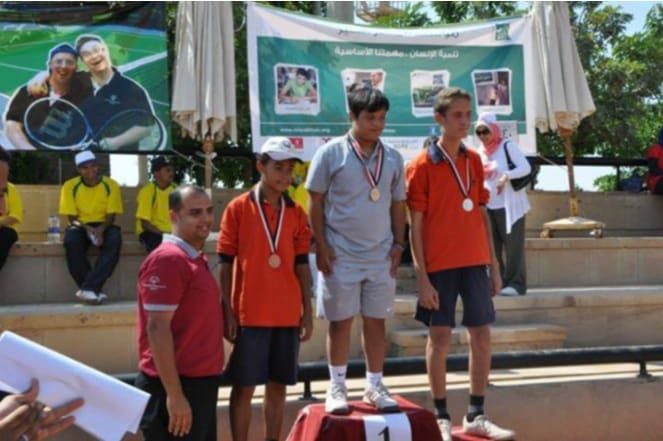 EIRC attendees Mohamed, 16, and Amr, 17, at the National Floor Tennis Championships in Cairo

Mohamed isn’t the only rising talent from the EIRC – Amr Ragab, 17, is also making his name in mainstream sport.

While Amr was receiving behavioural and speech therapy for his learning disability, he also proved to have great all-round sporting ability – and, with EIRC’s support, he has taken part in national football, badminton and floor tennis championships.

Between them, the two boys have already won a staggering 50 medals – and for two teenagers determined not to let disability hold them back in the mainstream world of sport, the future looks very bright indeed.

Islamic Relief has been working in Egypt since 2001. The EIRC is based in Helwan, and was our first project in the country. As well as focusing on supporting disabled people and children, we run vocational training projects to help Egyptians find employment, in addition to Qurbani, Ramadan and orphan sponsorship programmes.