Syria’s children continue to suffer in what is now thought to be the worst humanitarian disaster of modern times. Like many children worldwide, Syrian children still enjoy playing outside with their friends, at least to gain momentary happiness. For Khaled Ibrahim, aged 12, playing outside his home in Marat Al Numan is no longer a safe space. One afternoon, while he was busy playing with his friends, he was shot by a sniper.

“All of a sudden, I heard a shooting sound and I fell down.” Khaled told us.

“I tried to walk but I couldn’t. I used my hands to crawl, trying to get away from the constant shooting. My elder brother saved my life from the sniper.”

Khaled was shot in the foot. A neighbour rushed him to the nearest hospital. There, he learned that his foot was badly damaged in the attack. Moved to Bab Al Hawa hospital in Idleb, he underwent extensive surgery to save it.

“Thanks for God, the doctor assured me that I will be normal again soon and there is no need for my foot to be amputated.”

From his hospital bed, Khaled dreams of a life without fear for his six brothers and sisters, and the other children of Syria for whom violence is an unrelenting nightmare.

“My wish is to walk again and play with my friends in our village. It’s been a week in the hospital bed, unable to walk, play, and go to the bathroom. I’m sick of the whole situation.” 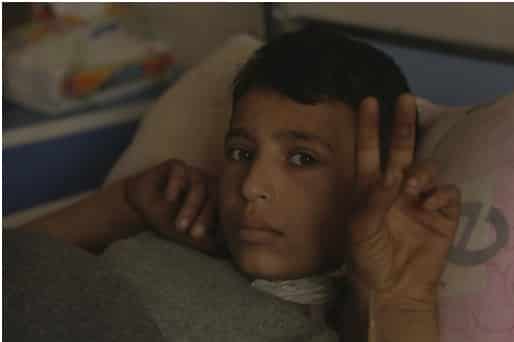 According to the United Nations, more than 10,000 children have been killed in Syria’s conflict. Many have lost their parents or close relatives, and tens of thousands have been forced to flee their homes.

Since 2012, Islamic Relief has been working deep inside Syria and in nearby countries to provide vital humanitarian aid to those caught up in the conflict. Last year alone, we reached around 2.72 million people.

A generation of children are growing up, knowing only the trauma and hardship of war. Support our work to ease the suffering of vulnerable children and their families: Donate to our Syria appeal today.