Reaching out in Nepal

Reaching out in Nepal

Islamic Relief has launched an urgent, global appeal to raise £2.5m for Nepal. Over the next few weeks we will provide food, tents, tarpaulin, blankets, water purification tablets and cooking pots and utensils for up to 30,000 homeless and displaced people. Our regional disaster response team is mainly made up of staff from our offices in India and Pakistan, who between them have many years of dealing with disasters in Asia, such as Pakistan and Nepali floods and drought in India.

Islamic Relief UK director Jehangir Malik describes the response as “a race against time.” And Haseeb Khalid from our disaster response team spoke of his “pain and agony” as he witnessed the suffering of Nepali people in remote villages.

“I saw so many people showing the signs of fear, shock and trauma,” said Haseeb. “As well as strong men I saw the most vulnerable people – the elderly and small children – having to make their way to bamboo fields and cut down bamboo to build makeshift shelters. Whole villages are sleeping under the sky.”

Haseeb met 32-year-old Guckul, a farmer from a village called Jyotishi Goun. Guckul and his 29-year-old wife Radika are sleeping outside with their three children, Ankita (twelve), Ankit (nine) and Anisa (three).

“When the earthquake hit it was horrifying, we are still frightened. All our houses are damaged and we are living under the open sky. My only cow died as rubble fell on her, we lost all our belongings and are left with nothing,” Guckul told us. 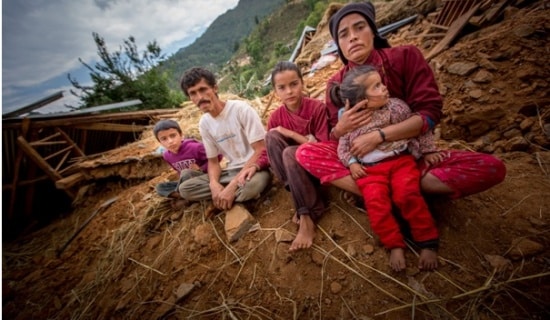