Providing a lifeline to Yemenis caught in conflict

Providing a lifeline to Yemenis caught in conflict

In the year since the conflict in Yemen escalated around 6,000 people have been killed, and numbers of those driven from their homes have risen sharply. The UN estimates that more than 80% of the population is in dire need of food and water – so many people have been forced off their agricultural lands and away from their water sources by the fighting.

Islamic Relief is one of the leading aid agencies involved in the relief effort. In the past 12 months we have provided emergency food aid, water and shelter to over 2.7 million people inside Yemen. We have repaired wells and provided non-food items such as kitchen sets and hygiene kits to families who have fled their homes. 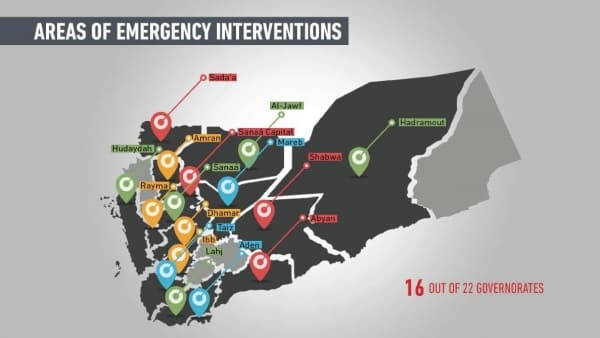 Islamic Relief has worked in Yemen continuously since 1998, responding to the years of unrest from 2004 and the resumption of civil war from 2011. This has enabled us to negotiate access to a number of besieged areas of Yemen, such as Taiz city – home to 300,000 people. Such places have been isolated from much of the international aid coming into the country but we are working in partnership with the UN World Food Programme alongside local aid agencies to ensure that aid reaches those who need it most.

The severity and unpredictability of this continuing conflict pose huge challenges for those delivering humanitarian aid. It is vital for all parties to the conflict to respect international humanitarian law and do more to ensure that aid workers have some protection in delivering aid and that civilians are not targeted.

Sadly, however, residential areas, medical facilities, social infrastructure and transportation have all been damaged in the past 12 months. Many health facilities have been completely destroyed, and a combination of the rising cost of fuel and insecurity on the roads has prevented medical supplies from reaching some of those that are left. More than 20 million people in Yemen are now without access to basic health care.

In response Islamic Relief UK is delivering vital medical supplies, such as antibiotics, bandages and pain relief medication, to 21 hospitals and clinics across the country – including some inside the besieged city of Taiz. Alongside this we are providing patients with safe drinking water and hygiene kits containing items such as toothpaste. We also support doctors and nurses to help them get through to hard-to-reach communities.

Islamic Relief has spent £5.9 million in the past year on saving lives in Yemen through the generosity of our supporters across the world, but much more is needed. This crisis has not attracted the same level of international attention as the war in Syria, and Islamic Relief is determined to do as much as it can to ensure that the people of Yemen are not forgotten and that their basic needs are met.