Nelson Mandela is one  of the most renowned leaders in history. After serving 26 years in prison, he became the first Prime Minister of an apartheid-free South Africa. He envisaged a land of freedom, equality, tolerance and happiness. For him, children are the corner-stone of society, and their futures were integral to his battles. One of Mandela’s dreams was to open a children’s hospital in his home city of Johannesburg.

The Nelson Mandela’s Children Hospital is due to open in 2016, and will fulfil Mandela’s lasting wish. Islamic Relief have signed an agreement of R100 million to build a centre of oncology, which will forever change life-saving care for children across southern Africa. The centre is being hailed as part of the legacy of Nelson Mandela, as the world marks the first anniversary of his passing.

Dr Mohamed Ashmawey, CEO of Islamic Relief Worldwide, said “Nelson Mandela gave us the vision of a world for our children that binds all of our hearts together. We had to be a part of this.“

He continued, “Islamic Relief and its supporters around the world today are humbled and honoured to become a part of that vision and a part of his lasting legacy. The Islamic Relief Oncology Centre of Excellence will provide intensive paediatric and specialist care, and serves the last wish of Nelson Mandela to build this hospital in Johannesburg. No child will be turned away because they cannot afford to pay.

“This is foremost a state-of-the-art children’s hospital in southern Africa – but it will go further to, God willing, play a transformative role for improving child-centred healthcare in the continent of Islamic Relief’s roots, where we started our work 30 years ago”.
Sibongile Mkhabela, CEO of the Nelson Mandela Children’s Hospital Trust, said: “As we reflect on the one year anniversary of Mr Mandela’s passing, we as the Hospital Trust are humbled by the support of Islamic Relief. On behalf of our board, we would like to thank their global donor community for this awe-inspiring donation.”

The agreement was signed during a site visit to the Nelson Mandela Children’s Hospital, which is being constructed in Johannesburg, South Africa on the anniversary of Mr. Mandela’s passing.

Rates of childhood cancer are rising across Africa. But, more than 40 per cent of children never receive the specialist care they need. Whilst in countries like the UK the survival rate is as high as 80 per cent, in South Africa, one in two children with cancer will die.

As a centre of clinical excellence, when the oncology unit opens it will enable more children across Africa to beat cancer. 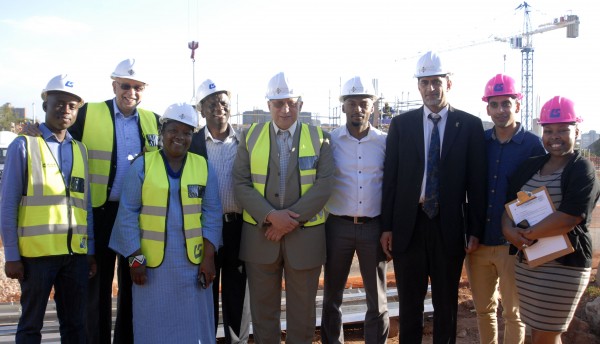