The work, which takes the form of the UK’s first-ever interfaith charity shop, is located on the third floor of the world famous Selfridges store and open to the public from Thursday 31 August to Sunday 22 October 2017.

The interfaith charity shop, which celebrates and unites the Muslim, Christian, Jewish and Buddhist communities, is run and staffed jointly by four religious charities chosen by Miranda July: Islamic Relief, Jewish charity Norwood, London Buddhist Centre and Spitalfields Crypt Trust. The proceeds will be shared equally between the four partners, all of whom run their own charity shops.

Net sales are divided equally between the four participating charity shops. Each is donating 2.5 per cent of their share to another charity of their choice: Islamic Relief is donating to The Bike Project; Norwood to Carers in Hertfordshire; London Buddhist Centre to Praxis Community Project; and Spitalfields Crypt Trust to Providence Row.

Items for sale are typical of those traditionally sold in charity shops – second-hand clothes, books, games, DVDs, kitchenware, toys ornaments and bric-a-brac. Prices are the same as in any charity shop.

“Art is at the heart of many nations, religions and communities, providing an intimate and authentic view into another’s culture and perception of the world.  We are proud to support Miranda and Artangel’s decision to use art as a platform for us to stand together in harmony and solidarity with our non-Muslim brothers and sisters, whilst helping us to continue with our mission to support and save the lives of many of the world’s vulnerable people.”

Miranda July is known for artworks that depend upon the public’s participation — be they apps, performances or sculptures. The artwork is a major commission by arts organisation Artangel, and is Miranda July’s first commission in the UK.

Her interfaith charity shop at Selfridges will present customers with an unexpected retail experience that will resonate with founder Harry Gordon Selfridge’s famous pronouncement in 1909 that his store was created as an open house, where “everyone is welcome”. 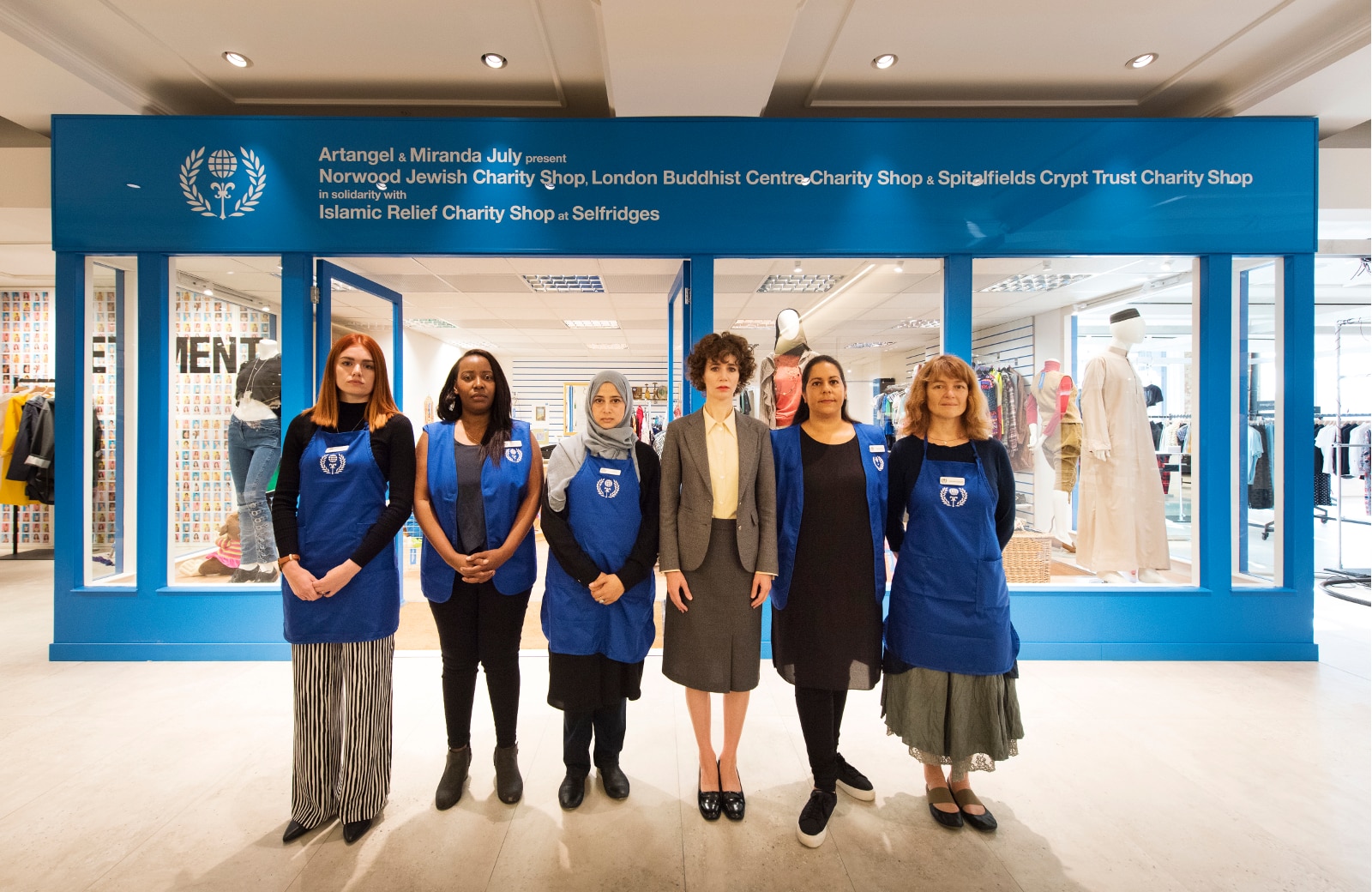 The full name of the work is:

Islamic Relief is an international aid and development charity that aims to alleviate the suffering of the world’s poorest people in more than 30 countries, mainly in Africa, Asia and the Middle East. As well as responding to disasters and emergencies, Islamic Relief promotes sustainable economic and social development by working with local communities – regardless of race, religion or gender. In its 33-year history, Islamic Relief has helped more than 110m people across the world. Islamic Relief is one of the 13 UK charities that form the DEC (Disasters Emergency Committee) – see here.

Artangel produces and presents extraordinary art in unexpected places in London, the UK and beyond. For over 30 years Artangel has generated some of the most talked-about art of recent times, including projects with Clio Barnard, Jeremy Deller, Roger Hiorns, Michael Landy, Steve McQueen, Rachel Whiteread, and more recently Ryoji Ikeda, PJ Harvey and Jorge Otero-Pailos’s The Ethics of Dust at Westminster Hall, Houses of Parliament. Appearing anywhere from vacant apartments stores, to subterranean vaults and London’s night sky, Artangel produces art that surprises, inspires and wouldn’t be possible within the confines of a gallery.

Miranda July is a filmmaker, artist, and writer. Her movies, performances and web-based projects have been presented at MoMA, The Brooklyn Academy of Music, and in two Whitney Biennials in New York. Her participatory artworks include the website Learning to Love You More (2000-2007; now in the collection of San Francisco Museum of Modern Art), Eleven Heavy Things (a sculpture garden created for the 2009 Venice Biennale), Somebody (2014; a messaging app created with Miu Miu) and New Society (2015; a performance).

She wrote, directed and starred in the films The Future (2011) and Me and You and Everyone We Know (2005; winner of a Special Jury Prize at the Sundance Film Festival and the Camera d’Or at the Cannes Film Festival). Her debut novel, The First Bad Man, was a New York Times bestseller in 2015 and her collection of stories, No One Belongs Here More Than You, from 2007, won the Frank O’Connor International Short Story Award; both books are published in twenty-five countries.

Her writing has also appeared in The Paris Review, Harper’s, and The New Yorker. It Chooses You was her first book of non-fiction. Earlier this year The Getty Research Institute acquired the archive of July’s Joanie 4 Jackie project, an underground video distribution network for women she founded in 1995. She is the recipient of a 2016 USA Artist Fellowship Award, and is a member of The Academy of Motion Pictures Arts and Sciences. July lives in Los Angeles.

The business was founded by American entrepreneur Harry Gordon Selfridge in 1909 and was widely regarded as the first and best example of a modern department store. Harry Gordon Selfridge ran the store himself until he retired in 1940. After several ownerships the company was de-merged from the Sears Group in 1998 and floated on the London Stock Exchange.

In 2003 W. Galen Weston purchased Selfridges and under his ownership Selfridges has become an extraordinary global destination for fashion, luxury and retail theatre. In June 2010 Selfridges was named Best Department Store in the World for the first time by the IGDS (Intercontinental Group of Department Stores). The title, which Selfridges held until June 2012, is the industry’s highest accolade. Selfridges won the title again in June 2012, and again in 2014 for an unprecedented three times consecutively. In May 2016, Selfridges won the inaugural award for World’s Best Sustainability Campaign at the IGDS world summit.

Selfridges has four stores in London, Birmingham and Manchester (Trafford Centre, Exchange Square) and our international website now delivers within the UK and to over 130 countries, trading in eight currencies. Selfridges today, continues Harry Gordon Selfridge’s legacy – a shopping experience that promises to surprise, amaze and amuse its customers by delivering extraordinary customer experiences.

The London Buddhist Centre (LBC) in the heart of the East End teaches meditation, mindfulness and yoga through daily classes, courses and retreats. Our aim is to help people from all walks of life lead more fulfilling lives, reach their highest potential and alleviate suffering in the world. Buddhists practise non-violence and believe our minds determine how we respond to our experience. We provide practical tools so that people can change their minds and develop greater wisdom and compassion for responding creatively to the world.

The Centre offers an oasis of calm in the midst of busy urban life and is very much part of the local, diverse landscape in Tower Hamlets *. Through its innovative mindfulness programme the LBC reaches out to people living with stress, pain, depression and addiction. We also run events for families, carers, schools, and professionals as well as arts happenings. Many of our activities are by donation and teachers give their time and skills voluntarily for the benefit of others.

* More than two-thirds of the London Borough of Tower Hamlet’s population belong to minority ethnic groups i.e. are not white British (2011 Census). According to the Office of National Statistics, Tower Hamlets is home to the highest proportion of Muslims in England, with a 45.6 per cent Muslim population (Daily Telegraph, 31 January 2016).

Norwood is the largest Jewish charity in the UK supporting vulnerable children and their families, children with special educational needs and people with learning disabilities and autism. Founded in 1795, Norwood is one of the UK’s oldest charities and the only Jewish charity to enjoy the Patronage of Her Majesty The Queen. It helps children and adults to maximise their potential at home, at school and throughout their lives, through personalised services designed to enable choice.

Each year Norwood needs £35m to keep its services running, £12m of which comes through voluntary donations. These services include a total of 55 residential, supported living and family centres across London and the South East.

Norwood currently runs eight charity shops across North and East London thanks to the support of 150 dedicated volunteers.

SCT’s support isn’t a ‘one-size-fits-all’ approach but is personalised to fit each person’s individual needs and hopes. Its approach combines Christian values with best practice and innovation. It helps people of all faiths and none.