In Iraq, hundreds of thousands of people have fled violence and armed clashes in the western province of Anbar.

Since the 72 hour cease-fire – which started on 22 February – the situation in Anbar remains volatile. Tens of thousands continue to flee fierce fighting between government security forces, armed fighters and tribal groups, while many are believed to be trapped in what are being described as siege-like conditions, sealed off from aid.

According to the latest UN figures, 45,000 families from Anbar have been uprooted in the last four weeks.  The total number of displaced people is now thought to stand at more than 300,000.

Many have scattered around Anbar, seeking refuge in other cities, where they are hosted by the local community and are living in schools, mosques or public buildings. Over 33,300 families are estimated to be displaced across the province.

Access in Anbar remains the main challenge, with significant efforts by UN agencies and other international NGOs to get supplies to vulnerable families – particularly to the unknown numbers still stuck behind military lines in parts of Ramadi and Fallujah. The main roads are still sealed off due to fighting, and several bridges in the province – including one linking the city of Fallujah to Baghdad – have been destroyed.

In addition to dealing with chronic fuel and power shortages, aid efforts are also affected by the collapse in telecommunications in the governorate over the last weeks – making communications difficult. Schools and shops in Anbar are thought to have shut down, with food and water running low, and poor sanitary conditions.

Unfortunately, most relief convoys sent by UN and NGOs have been unable to get through checkpoints. Host communities are also struggling, as they share their already limited resources with the influx of displaced families. 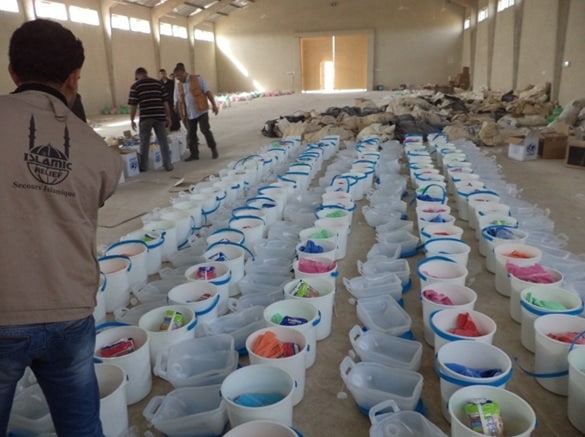 In an agreement with UNICEF, Islamic Relief – which has been working in Iraq since 1996 – is to assess humanitarian aid and evaluate the safest way to deliver aid. We continue to work through UN-led clusters to access displaced families inside and outside of Anbar.

In Al-Khaldiyah city, we distributed 2,500 water and sanitation kits as well as 600 hygiene kits – all provided by UNICEF. These contained items such as soap, detergent and water purifying tablets. We have also delivered six large water tanks – which hold 5,000 litres – to local schools and mosques, and a further nine 1,000 litre tanks across the area for use by displaced people.

Over 900 families in Amiriyat Al-Fallujah benefited from a separate distribution of the kits, and we also provided 40 large garbage bins.

To support our response to the conflict in Iraq, please donate to our Global Emergencies Fund.