Hafsa was just 14 years old when her parents told her she was to be married to a relative in Basra, Iraq. She would go on to experience years of sexual and emotional abuse.

It took over two decades before she was able to reach out to Islamic Relief for help.

The fourteen year old was sent from her home in Kirkuk, Iraq, to meet her future husband. Travelling alone, she was kidnapped while changing trains at Baghdad station.

A woman took her ID documents and threatened to kill her if she tried to escape.

Hafsa was sold to a human trafficker who raped her. He sold her to another man who forcibly married her. The man took her to his home in rural Baghdad and subjected her to repeated sexual and emotional abuse, which ended only when a neighbour killed him.

The police arrested Hafsa. She experienced further abuse in custody, until an elderly man helped her escape and took her to his home in Anbar, promising to treat her like a daughter. 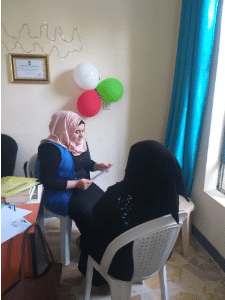 But he too forced her into marriage, telling her it was for her own good. They had three children. When he died, she raised them on her own.

Hafsa was 40 years old when, in December 2018, she saw a community play on early and forced marriage. Islamic Relief put on the play to raise awareness of gender-based violence.

It took two months of searching, but Hafsa’s family was located with the help of Islamic Relief staff in Iraq, the local community and a sheikh, tribal leader.

Having not heard from her in over 25 years, her family had assumed she was dead and reported her death to the authorities. Hafsa was afraid to meet her family at first, but they came to visit her in Anbar.

After years of not knowing if she would see her family again, she is now reunited with them and relieved to have been able to seek help from Islamic Relief.

Her identity papers were stolen when she was abducted as a child, and without them she cannot access the government services she needs. As a widow, it’s particularly hard for her make ends meet.

Islamic Relief, once more, is offering a helping hand. We are working with other organisations that can help survivors of gender-based violence with legal support and services.

We will continue to do all we can to enable Hafsa to build the new life she so desperately wants.

Islamic Relief seeks to end all forms of gender-based violence including early and forced marriage and domestic abuse.

*Name changed to protect her identity