Drought is devastating the lives of entire communities across East Africa. The drought, one of the worst in recent history, has struck the region with parts of Somalia, Ethiopia, and Kenya as the hardest-hit.

15 million people now face dire circumstances as they are confronted by severe shortages of food. Amongst them, over 5 million children are expected to suffer from malnutrition as a result.

After rains have failed for three successive seasons, many are continuing to lose their livelihoods and income due to the impact of the drought. As a result, the price of available food and water is soaring. What’s more, women and girls forced to walk miles to retrieve water from functioning water points are increasingly exposed to the risk of violence and sexual abuse.

Families are taking desperate measures to survive, by leaving their homes in search of food and water, they are facing extreme vulnerabilities.

With the situation expected to deteriorate further, millions are in desperate need of your help. Islamic Relief are on the ground distributing essential food, water, and shelter items, but we need your help to support the tens of thousands of people seeking the means to survive. 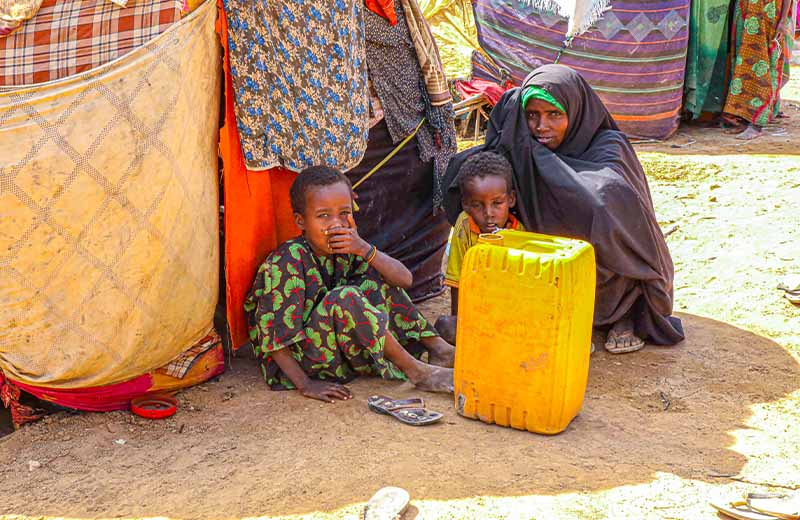 Somalia: 90% of the country’s districts struck by drought

Somalia is amongst the hardest hit in the drought. Currently, almost 90 per cent of the country’s districts (66 out of 74) have been struck by the drought, and approximately 4.3 million people are in desperate need of provision.

According to the UN, 271,000 people in Somalia have been forced to abandon their homes in a desperate attempt to reach food, water, and pasture – exposing them to many more terrifying dangers.

Gender-based violence, disease outbreaks due to a lack of access to sanitation and hygiene facilities, a lack of shelter and more face the hundreds of thousands as they leave home in search of food and water.

The region is facing the longest sequence of poor rains since 1981 – an astonishing period of hardship facing the people of Somalia. A culmination of food and water shortages, protracted conflicted, climatic shocks, disease outbreaks and the socio-economic impact of Covid-19 over the years have put millions into an impossible situation.

The next rainy season in Somalia is not expected until April 2022, but the millions of people already living without their basic means of survival cannot wait that long.

Urgent humanitarian aid needs to be provided to communities facing starvation and a host of other terrors due to food and water shortages, displacement and more. Islamic Relief has worked in Somalia for 15 years and are now working tirelessly to respond to the current crisis unfolding.

Today, one of the world’s most extreme hunger crises is facing the people of Ethiopia.

The UN estimates there are now 13.6 million people in dire need of food aid.

One of the worst areas to be hit by the growing drought crisis is Borena, in the Oromia region, which shares a southern border with Kenya. There, 69,000 livestock have died due to the effects of a drought, cutting off livelihoods and provisions for thousands of people who have no-where else to turn for food and income.

To further add to the terrifying circumstances unfolding in Ethiopia, the northern region continues to be one of the most dangerous places to deliver aid.

Conflict in the northern region of Tigray in late 2020 has sprung into action blockades that prevent essential food and medicine from reaching people in need. As a result, many hundreds of thousands of people are starving to death.

Currently, the amount of people affected is unclear due to restricted access to the region, however the situation is dire. Currently, over 5 million in the region are facing food shortages, while approximately 400,000 are facing catastrophic hunger on a global level.

Islamic Relief is one of the few international organisations providing food and other relief to displaced people in the conflict-affected region of Afar in the north, with plans to extend our reach to those in the south. Please Donate to Islamic Relief’s East Africa Emergency Appeal now and help us to reach those in desperate need of our help.

The growing drought crisis in Kenya has been a devastating blow for the many vulnerable people living in the northern, north-eastern, and coastal areas of Kenya, who are now experiencing one of their worst rainfalls in decades.

For the millions who depend largely on agriculture for income, the drought has tragically ripped them of their livelihoods and plunged them into dire circumstances. More than 1.4 million cows, sheep, goats, and camels have already died, causing milk production to drop to less than half of normal levels.

With livestock rapidly declining, many have been forced to walk to source pasture and food and water supplies.

Currently, 2.9 million people are in need of urgent food aid and humanitarian assistance.

Islamic Relief is providing thousands of drought-affected families with cash transfers to help people in remote areas. However, the crisis unfolding is unimaginable, and many are running out of time to find the means of their survival. Please Donate to Islamic Relief’s East Africa Emergency Appeal now and help us to reach those in desperate need.

Islamic Relief are on the ground

Islamic Relief have been on the ground in these parts for over 15 years, working to provide sustainable solutions and response mechanisms to droughts occurring in the area. However, the frequency and intensity of the droughts are leaving these resilient communities with no time to recover in between disasters.

That’s why Islamic Relief needs your urgent help and support to provide the aid these people need to survive.

Boreholes, micro-dams, and new irrigation systems provided by Islamic Relief across the decades are providing effective for the many communities who have been able to reach them or produce crops for a longer period. However, with hundreds of thousands fleeing to limited resources, Islamic Relief need your help to provide urgent aid provisions, such as food, shelter, and water items.