Afghanistan has made huge progress over the last decade - in education, women's rights, healthcare and so much more. But drops in aid put all those positive changes at risk, and when the troops leave at the end of this year, there is a real danger of the international community forgetting Afghanistan. Join us to tell world leaders: in its hour of need, Don't Abandon Afghanistan.

After years of being torn apart by war, Afghanistan is still a country where poverty kills more people than conflict. Islamic Relief is deeply concerned that significant aid cuts are threatening to derail over a decade of progress in education, health care and women’s rights in Afghanistan.

Aid has already fallen from $894 million in 2011 to just $508 million in 2013, and less than a fifth of the UN’s humanitarian plan for 2014 was funded by late March 2014. We believe that this sharp drop in aid poses a significant threat to the prospects for Afghanistan’s poorest people in a year of heightened uncertainty, as preparations for the withdrawal of foreign troops gather pace.

It is vital that  the international community does not turn its back on Afghanistan’s people at this time of transition.

We urge you as the UK Prime Minister to take a lead in rallying international support for Afghanistan as the UK prepares to host a global pledging conference in the autumn.

A new generation of Afghan children could be sentenced to a life of poverty if  aid cuts deny support to agriculture, health, education and other vital areas. Islamic Relief urges the international community to stand with Afghanistan and work towards a brighter future through the following measures: 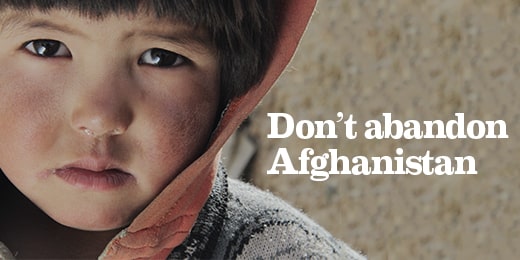