The purpose of this challenge was two-fold: to raise vital funds for those who are displaced across the world and to raise awareness for the people who regularly have to endure harsh living conditions.

Almost 60 volunteers gathered in a cold field in Staffordshire before trekking through the forest to a makeshift camp.

Caption: Volunteers meet before receiving their instructions for the challenge

Mariam from Leicester explained: “I was asked if I was looking forward to the Survival Camp. I was not. 24 hours with no central heating, no bed and no tea on tap? Not my idea of a good weekend!”

Like all of our volunteers, Mariam chose to take part. But for thousands of people, it’s not a matter of choice; it is the harsh reality they face every single day.

After the brief, the volunteers began their 5K trek through a cold, muddy and wet forest. The terrain was slippery so each step was carefully planned which made progress slow, but pace had to be kept up in order to keep warm and reach the checkpoint by nightfall. 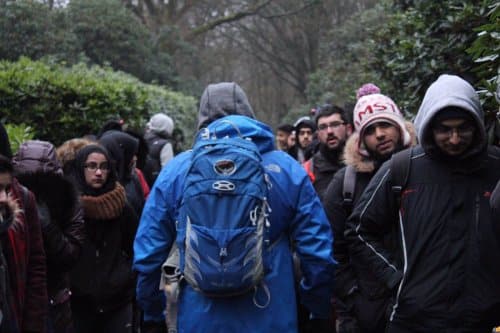 Caption: Volunteers trek through the forest to the camp checkpoint

Shayma from Hyde recalls: “During the trek, we were harassed and ridiculed at security check points by guards. They were checking our IDs, pushing and shoving group members and even shouting and tormenting us for no apparent reason.”

The trek began at around 3pm and the group didn’t reach the campsite until after 6.30pm – it was dark well before the volunteers reached their destination. Without head torches, the trek would have been incredibly dangerous in complete darkness. 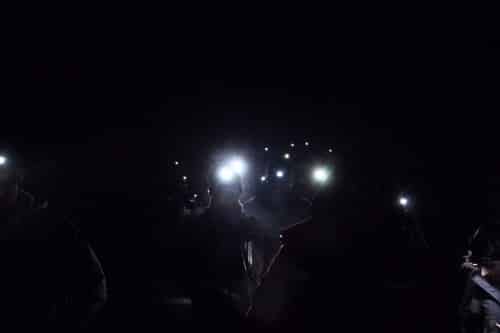 Reaching the campsite in the early evening offered the volunteers little relief as they were ordered to line up in single file and present their ID cards to collect their rations.

Asad from Scotland noted the despair some volunteers felt: “If you had lost your ID, you were belittled and given nothing.”

Those who still had their IDs were given the most basic meal. Some ate quickly after the long trek, yet others took their time, savouring every bite, as they didn’t know when they would get their next meal. 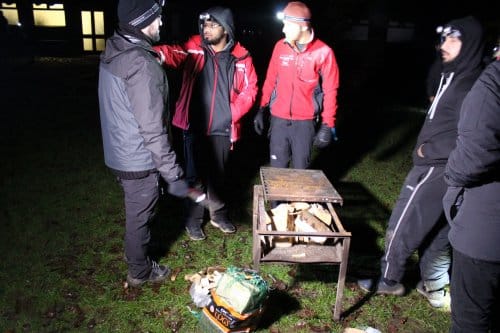 Caption: Volunteers reach the camp and their IDs are checked

The volunteers had to cook their own first hot meal of the day, which many found difficult, especially over an open flame. After a few hours the group finally managed to get the fire going and ate at around 11pm. 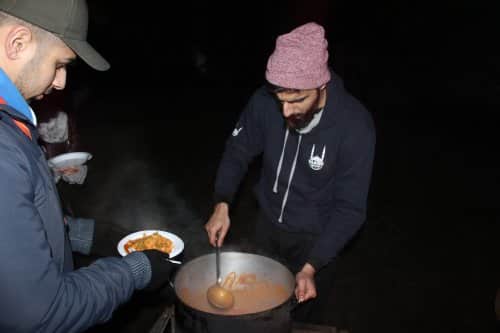 Caption: Volunteers cook over an open fire late into the night

After their meal, the volunteers began another short trek to where one of the guides had started a campfire. He asked the group to reflect on the events of the day: the struggle, the fatigue, the hunger and the cold.

As the volunteers stood around the warm fire, they were asked to reflect on the day – although they had only been experiencing hardship for one day, some were ready to leave. This highlighted the plight of displaced people in stark contrast to their own lives. 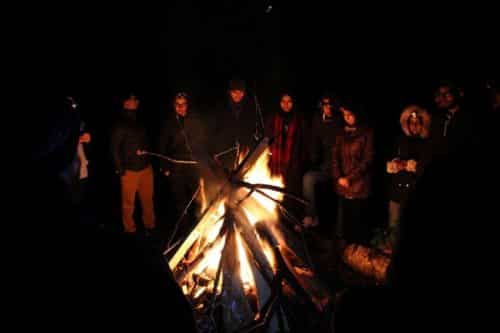 Caption: Gathering around the campfire to keep warm on a bitterly cold evening

The volunteers made it back to their tents late that night as the temperature dropped to -4C – a tent is a luxury many displaced people do not have.

The next morning the group woke up exhausted after a restless, cold sleep. There was recap of the previous day’s events and a workshop on how humanitarian aid is delivered during times of crisis. 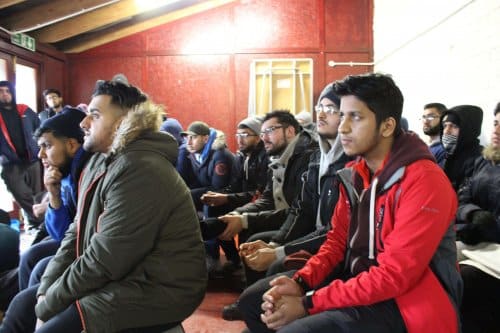 Caption: Volunteers take part in a morning workshop and reflect on their experience

During the final reflection of the weekend, the volunteers were asked to say a few words about their experience and what they would take away from the Survival Camp.

Imran, a participant from Scotland, summed up: “Yes, I trekked out in the cold, I ate bare minimum and I slept outside in the cold. BUT where am I going now? I’m going home to shelter, with warm food, with family. Alhamdulillah.”

In the freezing cold, a sigh of relief was felt throughout the group, as the tents and sleeping bags were put away. 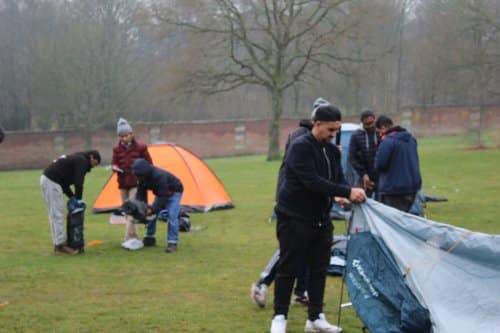 Caption: Volunteers pack away their tents and sleeping bags

The experience highlighted to the group the harsh daily reality that many face. One volunteer asked: “Women, children and the elderly do this every day. This is their life. There are probably children who were born into this. How is that even possible?”

Islamic Relief would like to salute the courage and strength of displaced people. We pray that Allah eases their burden and guides them home. Ameen.