Ms Abbott has just returned from a short visit to Somaliland organised by the Muslim Charities Forum, an umbrella group of leading UK Muslim charities that is concerned about the devastating impact of four seasons of poor rainfall and failed rains in succession, with increasing numbers of people starving to death and thousands of cattle already dead.

In response to this catastrophic drought, Islamic Relief announced earlier today that it will provide £150,000 in aid to the area.

The UN and international aid agencies have launched a $100 million appeal for Somalia to provide emergency relief to the 385,000 people in Somaliland and Puntland already facing severe hunger (‘acute food insecurity’) and another 1.3 million people at risk of hunger if they do not receive help soon. Around 1.7 million people in Somaliland and Puntland need humanitarian assistance to survive – nearly 40% of the 4.6 million population. 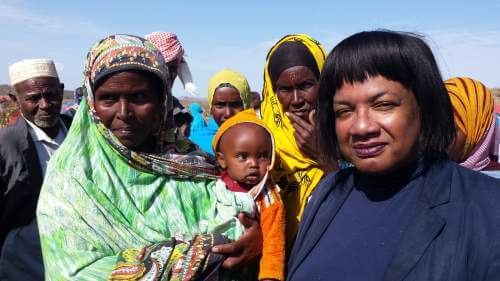 “Weather conditions linked to El Nino contributed to a failure of the 2015 rains across large areas of Somaliland and Puntland,” says Diane Abbott. “People are already dying from hunger and thirst, and the impact will be catastrophic if the international community does not step up its response.”

Ms Abbott visited Borama, the main town in Awdal – a region of Somaliland that borders Ethiopia and Djibouti and is worst affected by the drought.

“We visited displaced people’s camps where more than 1,200 hungry men, women and children had gathered,” Ms Abbott says. “Their only shelter is rough bivouac structures they have made themselves – bits of fabric and plastic draped over sticks, providing minimum privacy and protection from the elements.

“Animals are dying in their thousands, and the people who depend on them have started starving to death too. We spoke to families who had 500 or more animals three months ago, and now are left with 20 or fewer. For people who rely on their animals for meat, milk and trade, it’s the equivalent of losing your entire life savings.

“With more support and funding, the resilient people of Somaliland can not only stave off famine but also invest in what is needed in the longer term, including reseeding and protection of pastures, improved farming practices and the provision of stoves and cookers that reduce the need to chop down trees for fuel.”

Members of the Muslim Charities Forum are announcing today how they will respond to the crisis, and hope that by highlighting this emergency they will encourage others to act.

Human Appeal is announcing a £100,000 fund for food, water and sanitation projects, and is sending proposals to various donors to fund drought resilience and water infrastructure programmes.

Islamic Relief is announcing that it will provide £150,000 for water and emergency food aid, as well as seeking additional funding from institutional donors.

Muslim Hands will provide additional food, water, medical aid and livelihood support alongside its ongoing programme in Somalia, and hopes to raise an additional $1.5million.